What’s the point? How to measure type.

Thanks to the wonders of digitisation we now have more typefaces to choose from than ever before and they come in an infinite variety of sizes. But it wasn’t always like this.

There was a time when 72 points didn’t quite make an inch and typefaces came in sets of pre-defined sizes. The reason for this was that before you could see how much space a piece of copy occupied on.a page you had to be bale to estimate it. Type was measured vertically. 72 points of the occupied an inch of depth and  for ease of use the typesizes were denominators of 72 ( the numeric values divided easily into 72 for easy arithmetic).  For example, all of the following occupy one inch deep:

How cool is that? Too easy, far too easy as it happened. Just to make things a little more arcane, the sizes were identified by names instead of numbers. And to make matters even more interesting most of the names were pronounced differently to the way they were spelled. The sizing went like this:

Even more delightfully, the French and the Americans used different names for most of the sizes and no one agreed on the 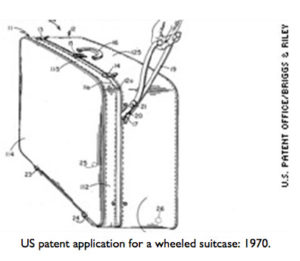 size of a point anyway. It took the introduction of what was originally called Desk Top Printing in the 1980’s for everyone to standardise the points system.

Why didn’t printers just use numbers instead of names in the first place? You might as well ask why the human race put a man on the moon before anyone thought of putting wheels on luggage.

Pictured on the right is the US patent application for putting wheels on a suitcase, dated a few months after the moon landing.