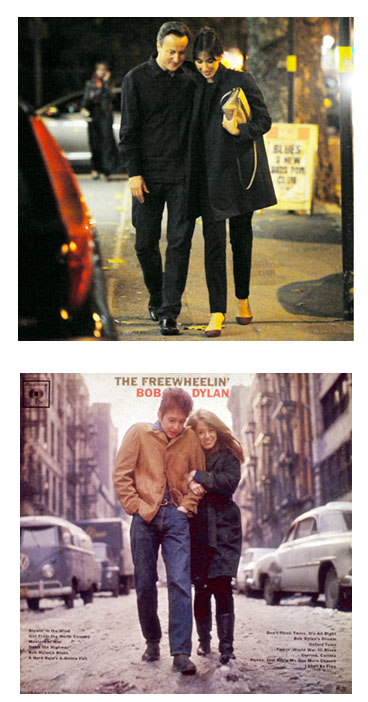 Prime minister Cameron’s birthday bash for two at a Birmingham Balti House was all very low key, apparently. An aide popped in earlier in the day to book a table for David and Samantha, and the PM duly popped in at 7.45 for a chicken bhuna balti, lamb rogan josh and some saag paneer. The assistants brought the booze to the unlicensed restaurant, while the minders waited discreetly outside.

All very normal and one nation. Luckily there was a photographer on hand to record the happy scene afterwards and record the everyday normality of it all, with an exquisitely lit night shot (no sign of a flash, just available light) of the happy couple either strolling the three miles back to their city centre hotel or hopping into their official car. No sign of the car though – or security, and Sam’s shoes, apparently highlighted by a spotlight, were not made for walking.

Lovely image, but we may have seen it before. How about the iconic image from Bob Dylan’s Freewheelin’ album from 1963? The image of His Bobness strolling arm in arm with girlfriend Suze Rotolo is a clear pre-echo of Dave and Sam’s post-curry picture and a twentieth-century icon.

Accident or beautifully stage-managed picture opp? Take your pic(k). The answer may be blowing in the wind.